Vivid Toy Group will be producing a range of Wombles toys based on the new CGI TV series and film later this year.

There will be an initial release in autumn 2015, followed by a full range of toys and collectables in 2016.

The company has secured an exclusive manufacturing and marketing deal with Wombles Copyright Holdings Ltd for the UK, France, Belgium, the Netherlands, Luxembourg, Germany, Austria and Switzerland.

Mike Batt said: “Vivid were our first choice for our master toy deal and we’re delighted that they share our vision. We’re aiming very high in terms of quality with the TV series, and we’re sure the toy range will be just as classy and delightful to a wide range of children.”

Mary Wood, marketing director at Vivid, said: “We’re extremely excited to be working with Mike Batt and his company on The Wombles. Endorsed by families who remember the original phenomenon, The Wombles has a gender-neutral appeal with instant brand recognition. As well as the nostalgia behind the brand, the relaunch will target a new generation of fans, widening the appeal.”

To start raising awareness in the toy industry, Orinoco visited the Toy Fair 2015 trade show at Olympia in London. See some photos from Twitter and Facebook below. 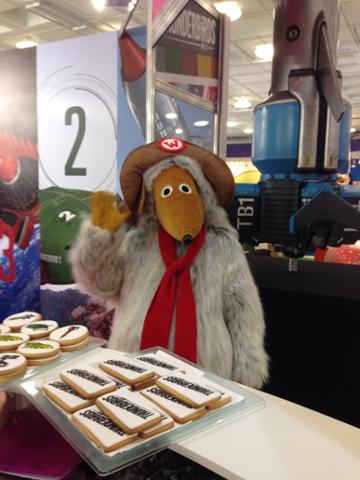 The Wombles have arrived! http://t.co/ZQUUtXzI21

As a Wimbledon based company we LOVE seeing the Wombles out & about @VividToyGroup !! #womble #toyfair2015

Nearly fell off my chair with excitement as a womble walked by. Remembered it's not a real womble :( #toyfair15

Never too old to appreciate meeting one of the #Wombles at #toyfair15 http://t.co/VKcWOCx4XH

A Womble also waved at me! #toyfair15 pic.twitter.com/4lX5NP0mx2

'I'm pretty sure that Womble is stalking me.' -Something you might find yourself saying while visiting #toyfair15

Had a great time at London Toy Fair yesterday - especially meeting Orinoco Womble and the Clangers!